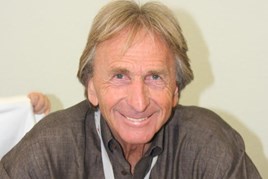 Hexagon is hoping to get a head-start in the fund raising stakes after inviting sports car racing legend Derek Bell MBE to a Le Mans-themed charity evening at its new flagship showroom.

Celebrity-filled event will feature a live Q+A hosted by Natalie Pinkham, historic competition cars from the world of endurance racing as well as a charity auction.

Paul Michaels, chairman of Hexagon Classics, said: “I’m thrilled that Derek Bell MBE will star at our charity evening. He’s the most successful British racer ever at Le Mans – a man who has won the event an incredible five times, at the wheel of some of the most beautiful Porsche competition cars of all time.

“With Richard Attwood confirmed as well – and more names to be revealed – our guests are in for a fantastic evening of racing stories.”

Michaels said that the charities supported by the special event were close to his heart, adding: “My granddaughter owes her life to the care she received while at Great Ormond Street and I am so happy that we will be able to give something back to this great hospital – and the Royal Brompton & Harefield Hospitals too.”

Last summer Hexagon hosted a celebration of the life of Ayrton Senna as its annual charitable event and raised £70,000.

Michaels said that he hoped this year’s event would “eclipse” that figure.