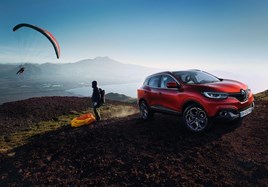 Renault’s franchised dealers soared to the top of the customer satisfaction charts with a strong showing from 38,000 surveyed customers in the annual Driver Power dealer chart.

Customers rated dealers representing 31 brands in seven separate categories, including how helpful staff were, how clean the showroom appeared and the standard of work.

Renault received top rankings for helpfulness and attitude, plus the overall dealer experience and value for money.

Paul Flanagan, Renault UK’s managing director, said: “These outstanding results for Renault and Dacia in the 2016 Auto Express Driver Power survey demonstrate the quality and reliability of our vehicles, the efforts that the Renault and Dacia dealer network has put into delivering exceptional customer service and reaffirm our commitment to customer experience throughout the entire ownership cycle of all of our cars.”

Last week Flanagan, who took up his post at Renault on May 1, told AM that stability and allowing dealers to drive the brands increased volumes at minimal expense in terms of bricks and mortar, were his key priorities.

Commenting on this week’s Driver Power result, he added: “We are delighted that our own customers have rated Renault best of all manufacturers and Dacia in second place overall – with the focus of our new Total Customer Experience team, we will aim to innovate and improve our levels of customer satisfaction even further in the years ahead.”

Brian Walters, Director of Research and Insight at Driver Power, added: "Renault improved in all six of the Driver Power after sales scoring attributes, most notably in keeping its customers informed on progress and cost of work, and the technical knowledge of its workshop employees.

“Renault now leads the industry with respect to the helpfulness and attitude of its dealership personnel. In fact, Renault is among the top three brands in all six of the Driver Power dealer attributes."

Customer satisfaction saw improvement across the board in this year’s Driver Power survey, with motorists happier than ever with 24 out of the 31 brands evaluated.

Suzuki saw the biggest jump on the leaderboard this year climbing 24 places to 7th, ranking 3​rd behind Dacia and Renault in value for money.

Lexus finished 3​rd overall but still holds onto its crown as number one for standard of workmanship and technical knowledge.