Humphries and Parks is ready for expansion 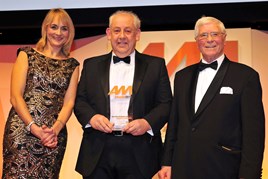 Mitsubishi dealer Humphries and Parks is ready to expand through acquisition after new management successfully revived the business.

Marcus Joy bought the business in 2012 after he was approached by the previous owner who was looking to retire. Joy had bought Mitsubishis from the dealership previously through his agricultural supply business.

Humphries and Parks won AM’s Most Improved Company of the Year in 2015 and Joy has started a Natwest and BT sponsored management training programme at Loughborough University and University College London to support his ambitions for expansion.

Joy said: “We're is in a process of transition right now and now very keen to expand through acquisition. The difficulty is finding somewhere within our North Kent and London area.

“Ideally we would want somewhere that was within an hour’s drive. We’re talking about expanding further with Mitsubishi and other franchises.”

Joy said the Natwest and BT programme is for businesses that are looking to take things to the next level.

He said: “It’s a mixture of classroom learning and lectures. It takes half a day a month and it’s going to be life changing for me and the business.

“Once a business goes to having over 50 staff it can be much more difficult to manage and this course is preparing for what I want to do next. It’s teaching me to work on the business, rather than work in it. That sounds simple, but it’s more difficult than you think to step away.”

Joy said Mitsubishi and ASE have also played a big part in supporting the development of the business as he had no formal training in motor retail when he bought the company.

He said: “I threw myself in with both feet. I sold my house to fund the business and I’m still living in rented accommodation. I don’t pay myself a wage and everything that has been made is going straight back into the business.

“If I had some advice for future leaders, it’s that you can’t be half in. I had no formal training in the motor trade and everything I’ve done with the business has been through hard graft. The business has become succesful much quicker than I had imagined. I think the fact I didn’t have any preconceived ideas of how to approach this has been a real asset.”

Joy recruits from outside the industry and his sales team have no previous automotive retail experience.

Joy said the growth in sales the dealership has seen has been helped by the Outlander PHEV.  While demand has “definitely settled down” to a new, slightly lower level Joy said the dealership is still selling between three and four a week.