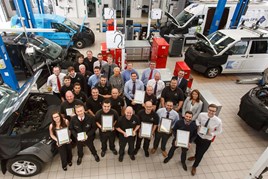 Swansway Garages’ Liverpool Van centre has been named as Volkswagen Commercial Vehicles’ Dealership of the Year for the third consecutive year.

“We’re running out of superlatives to describe them, their consistency in all areas of the business is simply phenomenal.

“To be top dealership three years running, speaks volumes about the way this team operates day after day, always on the top of their game.”

Swansway Group completed a hat-trick of manufacturer awards for 2016 when it was named Top Retail Group for Volkswagen Passenger cars for the third consecutive year at Volkswagen’s One Business Awards.

Celebrated at a dinner in Barcelona after Volkswagen’s Retailer Business Conference on January 28, the event, attended by more than 500 guests at the Museu Nacional d’Art de Catalunya, saw Arnold Clark Volkswagen in Wishaw take the top place on the One Business Scorecard league table for 2016 while Swansway Garages Limited topped the Retailer group rankings.

Swansway director John Smyth said: “Our sites in Crewe and Wrexham continue to do an amazing job, day in, day out; year in, year out.

“Their constant commitment to our caring, honest and proud values, shows in the consistency of their results and has brought us this third consecutive Volkswagen Top Retail Group award. Well done to both teams”.