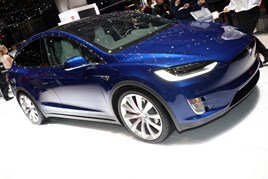 Tesla is poised to open a new store at Cambridge’s Grand Arcade as it continues to expand its UK retail network.

Last month AM revealed the premium EV manufacturer’s plans to create a second facility, delivering a showroom and servicing centre, in Leeds, and the hoardings are already up as a vacant store at the Cambridge shopping Centre is prepared for the brand’s arrival there.

Tesla is currently in the process of recruiting a manager for its new Cambridge facility, targeting an individual with a “passion for electric cars” who is that “is personable, energetic, highly organized and hard-working” via its website.

Tesla’s plans for a new Leeds facility are an expansion of a presence which saw a store established in the city’s Victoria Quarter shopping arcade.

Plans for the new Leeds location have been submitted to Leeds City Council and concern a site, just off the A61, which was last occupied by Farnell Land Rover.

There are currently 14 Tesla stores in the UK, including in London, Birmingham and Manchester.