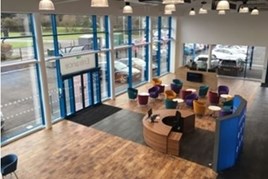 Evans Halshaw is preparing to develop a car supermarket at Shrewsbury’s Battlefield Enterprise Park as part of plans that will create 50 new jobs.

The Pendragon-owned group were granted permission by Shropshire Council after submitting its plans for the new sales, service, repair, valet and MOT centre and wash area on a site off Vanguard Way.

Plans for the site included details of a seven-day week in certain departments including sales, admin and servicing, the Shropshire Star reported.

Approval for the Evans Halshaw site comes after a heritage statement, supplied by Archaeological Building Recording Services, said that although the proposed development bordered the original Battle of Shrewsbury site, it would make little impact.

Pendragon set out plans to double its used car revenues in 2017 in its annual financial statement last month after the document revealed its new car turnover had declined 1.4% in 2016 – despite a 1.9% overall rise in revenue to £4.54 billion.

Pendragon chief executive, Trevor Finn, said: “Future growth will be driven by our initiatives, our investment in additional physical capacity for used car sales and by our strategic advantages in IT and intellectual property.

“We believe that we can achieve at least double digit growth in used revenue in 2017 and our aspiration over the next five years is to double our used vehicle revenue.”

Finn said that Pendragon intends to open five sites in the first half of 2017 and has five sites “actively being pursued for the second half of 2017”.

Last month Pendragon continued to expand its Evans Halshaw Car Store network with the opening of a new facility at Barnwood Point in Gloucester.