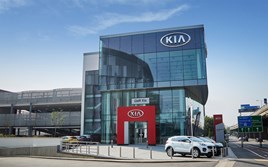 Norton Way Group has reported a 21% revenue rise to £213m for 2016 - a year after opening Europe’s largest Kia showroom in Brentford.

The Letworth Garden City-based retail group, which also secured the best fleet operation accolade at the 2017 AM Awards in February, revealed that turnover at the group had rsien to £213.9m from £189.8m 12 months earlier in its annual accounts to the year ended March 31, 2017.

The group – owned by the Japanese group Marubeni Auto Investment (UK) Ltd which also owns Salford-based RRG Group – expanded its portfolio to include Kia at the Brentford site which was opened in September last year and is owned by the Korean brand.

It now operates a total of seven sites across Hertfordshire, Middlesex and London, with Honda (3), Kia, Mazda, Nissan, Skoda and Peugeot.

Norton Way Group was founded in 1989 following the management buyout of a Honda dealership in Letchworth.

The group invested around £400,000 in Kia's flagship, four-storey showroom facility in Brentford, which opened last summer.

A 15-bay, below-ground workshop and a glass front facing directly on to the busy A4 as said to be key compenents of the business' projected success.

The top floor alongside the elevated section of the M4, meanwhile, will be a brand-showcase, featuring an LCD display screen designed to “enhance the often painfully slow journeys of tens of thousands of commuters who will pass the showroom daily”.

Paul Philpott, president and chief executive of Kia Motors (UK), said: “With more than 27 million vehicles passing this spot every year our new flagship dealership will be seen by more potential customers than any other Kia facility in Europe."