Independent workshops are 'better value for money' - but Honda has the best franchise workshops, survey reveals

Independent workshops had an average customer satisfaction score of 89.8% compared to 79.4% for franchised dealers.

What Car’s servicing satisfaction survey 2017 heard from 8,300 customers, who ranked 34 car brands on their most recent car service.

The scores were based on politeness of staff, quality of work and value for money.

In comparison, franchised workshops who serviced the majority of younger cars in the survey attained a customer satisfaction score of 80.9%.

Independents also nudged franchises for customer experience, scoring 94.2% on average for attitude and politeness of staff compared to 91.1%.

Critiqued for their higher pricing, franchised workshops also scored less for the quality of work, with 88.5% of customers satisfied compared to 92.7% of those who used independent workshops. 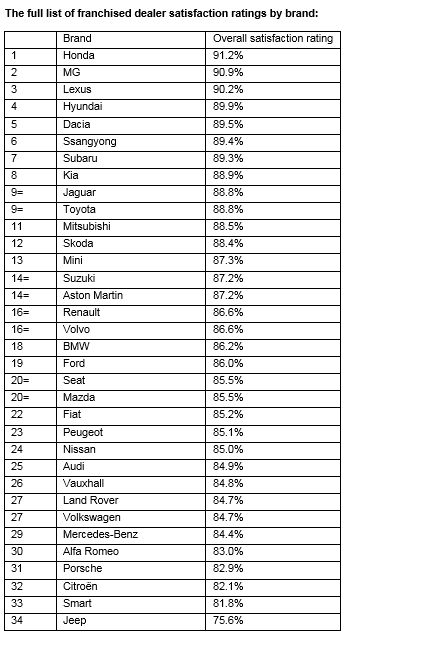 What Car’s editor Steve Huntingford said: “With value as a main driver for wandering customers, franchised dealers should look to secure loyalty early on.

“Fixed-price servicing plans remain popular, giving customers transparency over costs. Though such plans may not offer the same short-term returns of traditional servicing charges, it guarantees their money stays with the brand.”

Of the franchised workshops, Honda took the top spot for overall satisfaction across the entire car parc, keeping customers of older and newer cars happy with an overall customer satisfaction score of 91.2%.

MG came second, averaging 90.9% while Lexus completed the podium in third place with overall satisfaction of 90.2% across its franchised servicing departments.

A number of manufacturers in the top tier for overall servicing satisfaction offer their customers fixed-price servicing plans to keep costs down in the first years of ownership.

Honda has a five-year or 62,500 mile fixed-price servicing plan for all cars sold through its network that are under eight months old* while MG also allows customers to pay a one-off fee for servicing on certain models.

Huntingford said: “There are also considerable benefits for customers in having the manufacturer’s service stamp throughout their log book.

The protection of the manufacturer warranty, original parts and other franchise benefits such as a full valet and visual health check, still hold currency throughout the customer lifecycle where they are offered.”