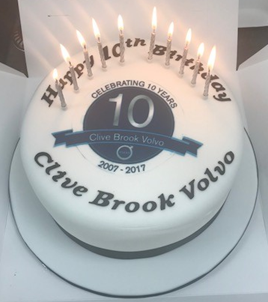 Clive Brook of Bradford and Huddersfield cut cake as part of its celebrations of 10 years with the Volvo brand.

The company was originally launched in Bradford, when managing director Clive Brook made the move from franchise manager at Harratts to purchasing the Bradford franchise, on 19th October 2007.

Seven years on from acquiring his first dealership, in 2015, Brook took over the Harratts Volvo operation in Huddersfield.

This marked his return to the facility where his automotive career began as an apprentice technician.

Brook said: “The success and turnaround of Bradford, and Huddersfield could not have happened without the effort of the entire dealership team, and I am immensely proud of their commitment to our customers.

“Our relationship with Volvo is even stronger today than when we first started and we are delighted to continue to play our part in taking the brand from strength to strength.

“Like Volvo, we are putting measures in place to continually grow our business and want to be recognised as one of the most successful vehicle retailers in the region.”

Brook has enjoyed a successful decade, including winning consecutive Trading Standards awards for ‘excellence in customer service’, and expects to sell his 1,000th new car in his tenth year.

The addition of the Huddersfield site has helped bolster sales volumes of both new and used vehicles to achieve a turnover that exceeded the £40m mark in 2016.