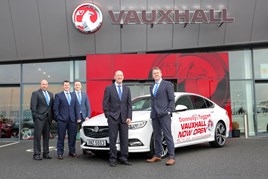 Northern Ireland’s Donnelly Group has acquired Eakin Bros’ County Londonderry Vauxhall franchise in an expansion which saw it claim to be “the home of Vauxhall in the North West”.

The largest family-owned new and used vehicle retailer in Northern Ireland currently represents 12 manufacturer brands but further developed its relationship with Vauxhall with its move for the Campsie Industrial Estate-based showroom.

The new Donnelly and Taggart Vauxhall showroom will result in the creation of four new jobs and takes the total number of Donnelly Vauxhall sites in Northern Ireland to three.

It is now the only Vauxhall-approved franchise for new car and van sales, Used Network Q approved vehicles, Motability and aftersales in the North West of Ireland.

Donnelly Group executive chairman, Terence Donnelly, said: “With existing Vauxhall franchises in Dungannon and Omagh, the Donnelly Group has a great relationship with Vauxhall and our significant knowledge of the brand ensures our customers benefit from the very best offers and service.

“As with our other sites, Donnelly and Taggart will provide a full offering including Motability and commercial vehicles which will enhance the overall service and experience for new and existing Vauxhall customers in the North West.”

He added: “At the Donnelly Group, we place great focus on keeping the customer central to everything we do, and work closely with all our manufacturers to ensure each and every customer benefits from the greatest choice, service, convenience and value at all eight of our locations across Northern Ireland.”

“The inclusion of commercial vehicles such as vans in our Vauxhall offering is particularly exciting, as that was not available in the area previously.

“Several of the staff from Eakin Bros have transferred to Donnelly and Taggart so for existing customers, there will be many familiar faces who bring with them a wealth of brand knowledge and experience.”

Chris Kearney, Vauxhall Network Development Manager, said: “Vauxhall already has a strong working relationship with the Donnelly Group, and we are delighted to continue this as we expand our representation within Northern Ireland.” 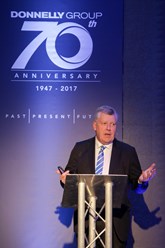