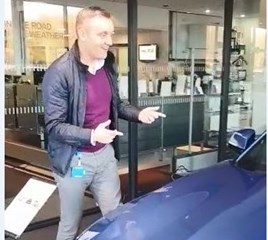 The team at Stratstone BMW appealed to a customer's love of football to score extra brownie points and lift his spirits after a car accident delayed the handover of his BMW 120.

The customer, Mr Jones, looked astonished as the Derby BMW team unveiled his new BMW 120, draped with an array of Real Madrid football goodies to help him on his road to recovery.

Jones and his wife were due to collect their new cars together from the Sir Frank Whittle Road dealership, but an unfortunate car accident prevented the handover from taking place.

After a period of recovery, he was able to collect his car at a later date, giving the team a chance to show off their “second-to-none” customer service skills.

As the sheet is removed, Jones appears delighted to see a Real Madrid FC shirt and calendar sitting inside the vehicle, courtesy of one of the dealerships business managers, who knew he had wanted the shirt for “some time”.

Visibly moved by the gesture, Jones immediately hugs the team members and exclaims, “you’ve made my year!”

Stratstone BMW Derby’s head of business, Chris Astle, said: “We were more than happy to treat one of our loyal customers after such an unfortunate incident.

“Mr Jones has been a regular with BMW Derby and I was thrilled to see his reaction to what turned out to be a pretty special handover and one we won’t forget.”