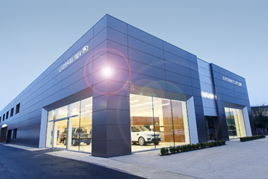 Swansway Group’s 2017 annual financial results have revealed that profits remained flat despite a 40% increase in turnover during the period.

The Crewe-based AM100 franchised dealer group generated revenues of £779.9m (2016: £557.9m) in its first full-year of trading since its acquisition of Thompson Motor Company, crediting the move in December 2016 and the growth of its VW Commercial Vehicles and stand-alone Jaguar and Land Rover dealerships for the increase.

Group director, Peter Smyth said: “We’re going through a period of consolidation following our acquisition of Thompson Motor Company and our joint focus is driving up our profitability and reducing our long term debt.

“Though we know the sector is going through a period of disruption, we believe that there will always be a need for a local, physical destination and we continue to invest in our businesses where we believe we will see an immediate return on that investment.

“We’re investing £700k in a workshop extension at our Stafford Land Rover site, which has been the Land Rover UK Dealership of the Year for two consecutive years.

“Our workshop there is at full capacity and with the increasing Land Rover parc, we expect to see a return on our investment within 12 months”.

The group revealed that it has also completed a revaluation of its Plant and Equipment and Fixtures and Fitting during the year, which has resulted in an increase of £1.16m in the value of these assets.

Following a strategic review the group closed its Honda operation in Manchester, meanwhile.

Smyth said: “So far 2018 has proved to be a good year, though obviously challenging and we look forward to 2019 as it’s our belief that with the franchises we hold and the people we employ, we will continue to prosper”.

“Though we’re not actively seeking to expand, we remain receptive to the right opportunities”.