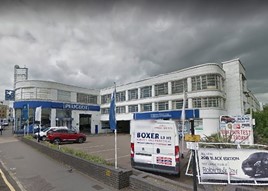 A Robins & Day Peugeot showroom described as a grade II listed “landmark” at the heart of Maidstone has been earmarked for redevelopment.

The 1930s art deco facility on Mill Street, Maidstone, looks set to be redeveloped as housing as the PSA Group-owned retail group prepares for a move for a new purpose-built showroom on the city’s Park Wood Industrial Estate.

Named Len House, the current Robins & Day dealership was built in 1938 by Howard and Souster, complete with a filling station and repair workshop for Rootes – then the biggest car manufacturing company in the country – the Kent Messenger reported.

The newspaper reported that, what it described as one of Maidstone's most "best recognised buildings" was now set for a fresh start, however.

In April, Maidstone council granted Chancerygate (Leinster Mews), the owner of the site earmarked for the new Robins & Day showroom off Cuxton Road planning permission after Len House was deemed no longer fit for purpose.

Savills estate agents told the council: "Peugeot’s existing buildings are no longer considered to be fit for purpose and given the constraints of being Listed, the renovation and redevelopment of their site does not offer a viable solution to achieve a replacement modern, car dealership."

Len House is one of five key sites in Maidstone that the city’s council had already identified for re-generation.

The Park Wood Industrial estate is already home to a number of car retailers.