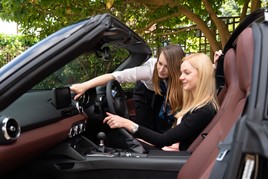 Over 400 cars have been delivered to customers as part of the “bespoke” test drive scheme since its launch within the M25 in July 2015 and the arrival of the scheme within the franchised retail network comes after “proof of concept”, according to Mazda UK managing director Jeremy Thomson.

Thomson described Hendy as “the ideal partner with which to launch our first MyWay dealership”, adding that the operation was the first of five Mazda franchises that the brand was looking to appoint as MyWay dealers in the coming months.

He added: “The London based programme has shown us the benefits of reaching out to customers on their terms by offering a more accessible way to test drive, buy and own a Mazda.”

Speaking to AM in July, Thomson said that discussions had been ongoing with retail groups which occupy more urban parts of the UK in relation to the roll-out of the MyWay scheme.

At the time he said he expected Salford-based RRG Group to be among five retailers to embark on a trial roll-out.

“As a manufacturer we don’t want to offer our support to anything that doesn’t make money,” said Thomson. “There are retail sites on the outskirts of London and in some other large city locations that must really struggle. This is our solution to that issue."

He added: “Ford has around 450 retailers and it’s clear that it holds a huge advantage in terms of influence as a result. Having twice as many Mazda dealers isn’t viable. I genuinely guard profitability.

“With MyWay we think we will be able to spread our territory and influence with our existing retailers and offer something to customers that is very much bespoke face-to-face service.”

Speaking after confirmation that Hendy would be the first Mazda franchissee to take on the MyWay scheme, Felicity Watson, Mazda MyWay sales manager at Hendy Mazda Tunbridge Wells, said: “We are excited to offer this bespoke service to our customers. While our traditional dealership-based sales set-up works for many customers, we know others would like a more flexible approach.

“Our Mazda MyWay service brings Mazda to your door, making the process of buying and owning a car effortless and enjoyable. The service enables customers who don’t want to travel to the centre of Tunbridge Wells to benefit from all the services offered at the Hendy Mazda showroom at a place and time that suits them.

“Opting for a test drive car to come to your door is not only easy, but it allows you to try the car on roads you drive every day, while the Mazda Brand Champion can answer any questions you have in a non-pressured environment. We can even carry out a part-exchange evaluation at your home.”

Launched in 2015, MyWay has been wholly supported by Mazda so far.

Managed by a team of three, the ten-strong MyWay team are all based remotely across the 22 London boroughs, operating on a completely commission-free basis as they conduct test drives and make sales.

The team also speaks a total of 18 languages, a skill that can come in handy when communicating with a wide range of customers in the cultural melting pot of London.

Thomson claims that MyWay has generated no staff turnover since the project started in July.

Mazda has been advising retailers in their approach to the recruitment of their own MyWay teams and is clearly keen to see the project succeed.

Thomson said: “I was very conscious that we had to have proof of concept before we took this to the network and we now have that. We’re handing over all that we’ve learned and there will be no rise in retail targets for MyWay dealers.

“If it all goes well we’ll roll it out to the rest of the network.”