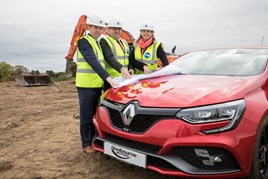 Shelbourne Motors is preparing to add a Renault dealership to its new £5m multi-franchise complex in Newry after reaching an agreement to represent the French car brand.

Building work has already commenced on the 50,000sq-ft development but Shelbourne has only now confirmed its second OEM Partner for the site, following its confirmation that a Kia showroom would occupy part of the space.

Caroline Willis, financial director of the Portadown headquartered retail operaton, said: “We’re delighted to extend our partnership with Renault by securing a deal to bring the global car brand to our new £5m Newry complex.

“Our long-term relationship with Renault made the manufacturer an obvious fit for this new development and it demonstrates their confidence in our business to incorporate a brand-new dealership into our Newry expansion.”

Newry based O’Hare & McGovern has been appointed as the contractor and work has commenced on building the multi-franchise complex.

The new facility will create 60 new jobs with its scheduled opening next summer.

Shelbourne Motors was founded by the Ward Family in 1973 and currently employs over 130 staff at its nine-acre Portadown headquarters, where it operates Toyota, Renault, Nissan and Dacia franchises, as well as used car supermarket, rental division, accident repair centre and valet centre.