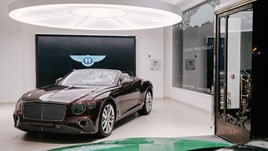 Mayfair’s motorheads packed the prestigious London showroom, which was founded back in 1953, in time to pick an early Christmas present.

Bentley’s new Continental GT Convertible – the third generation of the Volkswagen Group’s Crewe-built grand tourer – can recline its roof in 19 seconds and claims to be 20% lighter and 5% stiffer than its predecessor, the GTC.

Launched with the latest version of Bentley’s six-litre, twin-turbocharged W12 engine under its long bonnet, the newcomer to Bentley dealerships produces 626bhp and 664l.ft. and will accelerate to 62mph in 3.8 seconds on its way to a 207mph top speed. 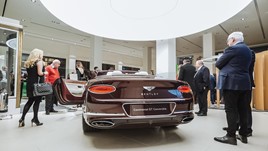 Recognising the significance of another Bentley launch event at the Jack Barclay car dealership, a statement issued by HR Owen said: “Jack Barclay Bentley has a unique connection to the Bentley brand, with its namesake considered as one of the original ‘Bentley Boys’.

“Racing driver Jack Barclay drove a roofless Bentley 4.5-litre to victory in the 1929 Brooklands 500, setting an average speed of more than 107mph.

“The showroom retains many of its original features, including the iconic chequered floor, wood-panelling and art deco signage.”