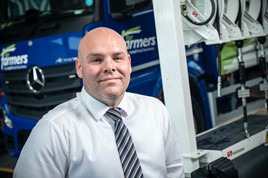 City West Commercials has revealed growth plans for its Exeter depot, including a new MOT bay and additional recruits.

Having opened a new service centre for vans and trucks at the Greendale Business Park at Woodbury Salterton in May 2018, the company has announced that it will be adding a new MOT bay to its existing nine-bay workshop by the end of March.

The MOT bay will provide tests for 4, 5 and Class 7 light commercial vehicles.

City West Commercials’ Exeter depot manager, Joe Casley (pictured), said: “Investing in our growing team is something that is of great importance to us – especially given our service and parts offering at the depot.

"We’re delighted to have a part to play as a local employer, as well as help young people through our apprentice scheme."

City West Commercials will also be adding five new recruits to its team, which is currently 27-strong, in response to growing demand.

New recruits will include three technicians, a parts advisor and an administrator.  It will also be offering an apprenticeship in September.

Casley said: “Client feedback has shown that they really like the convenient and accessible location of our depot, coupled with the fact that our site is spacious – meaning it is easier to manoeuvre and park vehicles.

"Many of our customers are also based on Greendale Business Park, but we also can support those who are passing thanks to easy access to the M5 from Junction 30.”

The drive-through workshop features two 18-metre pits as well as ramps, while the building also incorporates a well-stocked parts department.