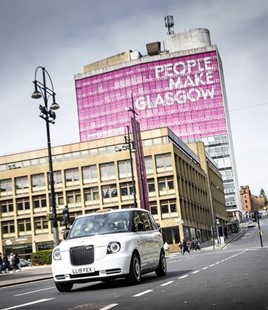 Glasgow has opened its doors to the a LEVC franchised dealership to support the adoption of electric taxis.

LEVC Glasgow, located at Taggart’s Volvo showroom in Hillington Park Glasgow will be the new home of the LEVC TX, run by head of business Derek Muir and operating as part of Taggart’s Motor Group.

A spokesperson for LEVC told AM in 2018 that the company was still on the look out for more dealers to take on the franchise in major cities in the UK.

With around 20 TX electric taxis already operating across Glasgow, the appointment of an official dealer will further support the adoption of zero emission capable taxis.

Muir said: “Our dedicated team are on hand to provide information on the amazing technology behind the TX and look forward to welcoming taxi drivers at our open days on April 16-17 where display vehicles and demonstrators will be available to test drive.”

Its opening comes at a time when Scotland is heavily investing in improving air quality and encouraging the adoption of electric vehicles. Glasgow City Council has already begun to implement its electric vehicle strategy with £625,000 awarded by Transport Scotland to develop an existing charge point network - consisting of over 100 charge point locations.

LEVC’s sales, marketing and aftersales director Steve Cootes said: “We very much look forward to working with Derek and the team at LEVC Glasgow to deliver our purpose built, electric taxis into the West of Scotland.

"So far, we have had some really good feedback on the product from drivers in Scotland, with reported savings of around £100 per week in fuel - in addition to the added comfort and smoother ride.”

Additionally, Edinburgh has just announced plans to install a further 66 charge points across the city.