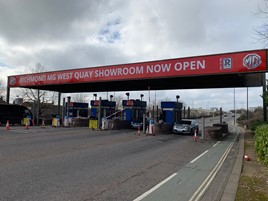 The busiest river crossing in Hampshire is where car dealer Richmond Motor Group is promoting its recent partnership with MG Motor UK.

They've jointly sponsored the Itchen Bridge, which is the main crossing in and out of Southampton and records more than six million drivers crossing every year.

Michael Nobes, founder and managing director of Richmond Motor Group, which has MG franchises in Southampton and Portsmouth, said: “Our sponsorship of the Itchen Bridge was a huge part of our dealership’s launch plan."

He added that the group doesn't usually carry out such large-scale sponsorships but it was an investment that was easy to justify.

"We are already off to a fantastic start with our partnership and extremely excited about the upcoming ZS electric car, which we see as an excellent choice for individual buyers and business fleets alike.”

Both sites have already installed charging points ahead of the arrival of the ZS later this year.

Daniel Gregorious, head of sales and marketing at MG Motor UK, said: “We’re very proud to be working in partnership with Richmond Motor Group, and it’s great to see such an impactful piece of MG branding right in the heart of Southampton."