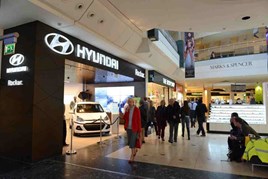 Motorline has ended its involvement in the Hyundai Bluewater Store after 16 months, stating that it does “not believe the mid- to long-term viability” of the shopping centre new car sales concept.

In March this year Endeavour Automotive took on the franchise Westfield Stratford City store, however, in a move Hyundai managing director Ashley Andrew said had been motivated by a streamlining of market areas.

Andrew told AM: “Initially Motorline expressed an interest in the concept but I think it was just natural to get the regional groups set-up as partner operations in their own territories.

“It just makes them far more agile because they have more demonstrators at their sites if they need a particular vehicle and they have service operations in the proximity.”

In a statement issued today (August 1), however, Motorline announced that it was walking away from the store concept altogether, stating that the viability of the standalone store has not delivered the planned volume and minimum return it requires.

Motorline chairman, Glen Obee, said: “The current economic climate and pressure to maintain an acceptable level of income from our wider Group activities has resulted in our decision to make a limited number of amendments to our Group representation model.”

He also underlined their role in exposing the bran to a new customer set by stating that the average age of a customer at the stores is 39, compared with 52 for the wider car retail environment, with women making up 54%, compared to 26% in a traditional dealership.

Commenting shortly after he revealed Endeavour’s plans to take on the Westfield Stratford City store earlier this year, Endeavour Automotive managing director, Adrian Wallington, said: “It’s a hard concept to ignore. They had 10,000 people through the door in January alone.”

The dealership facility has been moved to a newly refurbished, former JLR site acquired earlier this year.

Set to open on August 5 the refurbished dealership is located in the heart of the Ashford Orbital Motor Park.

It brings the total number of dealerships operated by Motorline at the Orbital to five including Hyundai, Toyota, Peugeot, Nissan and Renault in addition to its planned ‘Drive Now’ used car Centre opening in January 2020.

The newly refurbished facility showcasing Hyundai’s latest GDSI retail environment includes a nine new car showroom, eight bay workshop and display for over 65 used vehicles, Motorline Hyundai has been operating from a temporary location in Ashford for the past 18 months.

The group said in its annual results statement for the period to December 31, 2018, that while the acquisition of Lexus Bristol from Sytner in December 2017 and the opening of its new Lexus dealership at Gatwick had boosted its sales, higher administration costs elsewhere in the business and the reloaction of its Lexus Cardiff showroom had created an added financial burden.

Motorline said that it was confident that the alternative fuel vehicles (AFV) offered by its Toyota and Lexus brand partners would drive growth for the group, however.

A group statement addressing the 2018 financial results said: “Whilst disappointing this result was considered to be satisfactory, particularly with the increased cost base as a consequence of investing in future opportunities to be provided by the group’s key global manufacturer partners.”