AGT Europe to bring Dodge and Ram brands back to UK 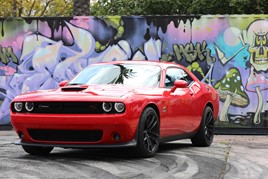 AGT Europe, an official FCA Group importer for the Dodge and Ram brands in Europe, wants to work with dealers to bring models back to the UK.

Dodge and Ram exited the UK market in 2010 and this was followed by Chrysler in 2017 after sales volumes dropped to an unsustainable level and the products failed to resonate with UK customers.

FCA Group instead looked to focus on its Jeep brand as its main offering from the US.

AGT Europe has sold over 20,000 vehicles since 2001 through its network of specialized dealers throughout Europe. FCA Group works with multiple importer businesses to get Dodge and Ram vehicles into European markets and ATG Europe is one of three official importers.

One of the others is AEC, which itself was searching for UK dealer partners back in 2017. It signed up David Boatwright Partnership in Essex two years ago as one of the only official agents to sell Dodge and Ram vehicles.

Giovanni De Luca, AGT Europe network development manager, acknowledged that the Dodge and Ram brands are a niche offering, but there is an appetite from customers and they will be targeting lifestyle, entrepreneur and SME customer demographics.

AGT Europe will be focussing on working with between three and four dealerships in the UK and an annual volume of 200 units split between them.

AGT Europe has a parts and accessories stock facility in Leipzig, Germany that is available for dealers to provide all original MOPAR spare parts, as well as Leer truck accessories.

De Luca told AM: “We are looking for dealerships that are enthusiastic about American cars and have working sales and aftersales structures, as well as being well known in their local area. It can be multi-brand dealers.

“Jeep dealers have some advantages on working with the Dodge and Ram models as the tools and hardware are the same or very similar.”