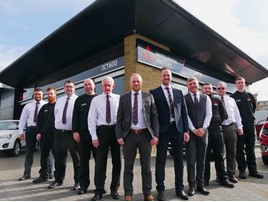 JCT600 has opened the doors at its new Mitsubishi Motors dealership in Bradford following a six figure investment to re-purpose the former BMW franchised site.

The creation of the new dealership, on Sticker Lane, is expected to create 16 jobs and has incorporated elements of the latest Mitsubishi Motors corporate design as well as having the capacity to display six new vehicles in the showroom and more than 30 new and used vehicles on the forecourt.

The workshop has also been significantly extended to include 15 bays, a statement issued by the Bradford-based AM100 retail group revealed.

A temporary pop-up Mitsubishi Bradford dealership had been opened during June in order to cater for the group's new customers ahead of the official opening of the new showroom facility.

Ryan Slater, general sales manager for JCT600 Mitsubishi Bradford, said: “It’s great to be bringing another global automotive brand to Sticker Lane, giving our customers even more choice with the addition of popular Mitsubishi models such as the L200 pick-up, and the Outlander PHEV which has been the best-selling plug-in hybrid since its launch in 2014.

“Our new showroom is one of the first in the country to feature elements of Mitsubishi Motor’s new corporate design, enabling customers to view the full range of new and used vehicles in a stylish and comfortable setting.

“The new dealership is expected to bring another 16 jobs to Bradford as we continue investing in the city. We look forward to welcoming customers to this impressive new facility.”

“With their expertise and excellent reputation in the area, we know that the region’s new and existing Mitsubishi owners are in safe hands.

“This is an exciting time for Mitsubishi Motors in the UK with the recent launch of the new L200 Series 6 pick-up, new 2020 ASX and the upcoming roll out of the new Mitsubishi Motors global dealership design, we look forward to working with JCT600 Bradford and wish them every success.”

In an interview with AM last year JCT600 chief executive John Tordoff spoke of his shock when BMW UK served JCT600 with 12 months’ notice that it would not renew its franchised contract for Bradford.

He said that the time that discussions were ongoing with potential additions to the portfolio to “fill in the gaps” in the group’s franchise portfolio as it neared the end of its contract with the German premium brand on October 1. But Tordoff insisted trading from the facility on Sticker Lane would not end abruptly.

“JCT600 will continue with a BMW aftersales operation and we’ll be selling used cars from the site,” he said.

“We own the land and the facility and we have the customer database for the area, so we’re in a very strong position from that point of view.”

Tordoff claimed that the BMW Bradford franchise had been the German brand’s best performing site in Yorkshire in 2017, but asserted that the site’s profitability will rise following the loss of the franchise and a shift to premium used cars.

With a team of 2,250 colleagues, the group last month announced record sales with turnover reaching £1.28bn.