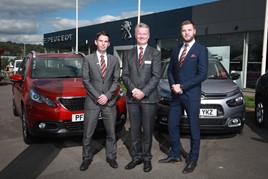 Perrys Motor Sales has brought together the PSA Group’s Citroen and Peugeot franchises under one roof at a new dual-brand showroom in Nelson, Lancashire.

The dual-brand Citroen and Peugeot dealership on Turner Road, Nelson, opened its doors on September 7 and includes the Citroen franchise after the nearby Churchill Way franchise was brought into the same site.

The development has resulted in a nine car showroom offering better customer service facilities, along with the choice of over 80 used cars and vans both franchised and non-franchised.

A statement issued by the Northampton-based AM100 retail group said that the business had made a “significant investment by combining the two sites”, also adding to additional sales executives, increasing its total number of employees in Nelson to 34 across sales, service, parts, admin and accounts.

Denise Millard, executive director at Perrys Motor Sales, said: “This is an important development for Perrys in the region, bringing together two successful sites into one integrated showroom.

“It’s the latest in a string of investments across the group and illustrates our commitment to Citroen, Peugeot and our customers in Nelson.

“We’ve already had very warm feedback from customers and staff who love the look and feel of the modern premises.”

The managing directors of PSA Group-owned brands Peugeot and Citroen have both indicated to AM in previous interviews that they are content for their products to be sold from dealerships shared with other brands from within the group.

Perrys has made a series of developments to its portfoloio in recent months.

In May it added 55 new employees to its workforce of over 1,900 with the addition of a new Mazda Canterbury dealership to its portfolio and announced the opening of a new £2m Ford Transit Commercial and Car dealership in Dover, which is due to open in September.

Perrys has also launched a new Perrys Leasing service, which it claims has been introduced in response to the “seismic shift of millennials preferring to rent rather than buy products and services”.