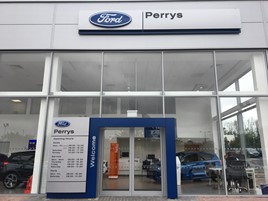 Perrys Motor Sales has continued its recent run of car dealership developments with the opening of its new £2m Ford Car and Transit Commercial showroom in Dover.

AM reported on plans for the new facility – located alongside the Perrys Vauxhall business in Whitfield, Dover – back in May, alongside its plans to become Europe’s largest independent Mazda retailer with the opening of another franchised site, in Canterbury, Kent.

The creation of the new Ford facility also follows the creation of a new dual-brand Citroen and Peugeot showroom, in Nelson, Lancashire.

Creating 35 new jobs, the opening of the Dover Ford dealership means that Perrys now has eight franchised sites with the blue oval.

Perrys also has Vauxhall dealerships in Broadstairs, Dover and Sittingbourne, and employs over 175 people across East Kent.

In April the group launched Perrys Leasing. The business said that the new venture had been launched in response to the “seismic shift of millennials preferring to rent rather than buy products and services”.

The new leasing service will specialise in Personal Contract Hire and Business Contract Hire for cars and commercial vehicles and had been designed to give customers greater choice, the group said.