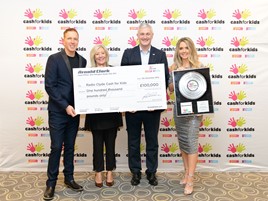 Arnold Clark has handed a £100,000 donation to the Cash for Kids children’s charity in time for the cause’s gift giving annual Mission Christmas campaign.

The topAM100 car retail group’s chief executive and managing director, Eddie Hawthorne, was named chairman of the charity’s board of trustees in 2018 and this year sees Arnold Clark awarded its platinum plaque in recognition of its continued support for the fourth year running.

With the aim of highlighting and combatting child poverty over the festive season, the Cash for Kids Mission Christmas campaign aims to provide a present for every child to open on Christmas morning via gift donation and collection centres throughout the country.

Hawthorne said: “We are delighted to continue our support of Cash for Kids. This incredibly important charity has been working tirelessly for almost four decades to alleviate child poverty, which is an issue of national importance.

“We hope this donation will help Cash for Kids support those young people who are most desperately in need of help.”

Judges selected the group after hearing about more than 500 charitable donations it made to good causes during 2018.

A main initiative it supports is the Kiltwalk in Scotland, which helps hundreds of Scottish charities to raise money every year.

Some 95 Arnold Clark employees took part in Kiltwalk 2018 and managed to raise a total of £140,000 between them for 54 charities in Scotland.

The aim of this initiative was to give children living in poverty across Glasgow and the west of Scotland a life-enhancing and memorable experience during the school summer holidays.

As well as its £100,000 charitable donation to Cash for Kids in 2019, Arnold Clark has donated two cars – a three-door and a five-door Mini – for the children’s charity to auction off at events being held in December.

The group has also helped put Cash for Kids’ festive fundraising for 2019 on screen, its in-house film studio having created a video to drive home the need to help the most vulnerable children in the West of Scotland, both at Christmas and throughout the year.

Printed publicity material has also been produced for Cash for Kids by Arnold Clark and the group has provided a minibus on a one-year loan to whichever school raises the most funds through the Cash for Kids’ Christmas Jumper Day event.

Debbie Fraser, Cash for Kids’ regional charity manager, said: “We are again delighted to award Arnold Clark with a Platinum Disc in recognition of their continued generous support towards vulnerable children across Glasgow and the West of Scotland.

“It means we can help make a difference to the lives of the poorest children in our communities.”