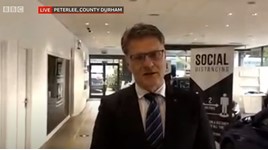 Forrester spoke live from Peterlee, in County Durham, as he outlined the changes that had been made to minimise customers’ risk of exposure to COVID-19 coronavirus in a showroom and during the wider car buying process.

His interview came just hours after Prime Minister, Boris Johnson, announced that car showrooms across the UK would be allowed to re-open from June 1.

Forrester said that unaccompanied test drives would be one key area of change for car buyers at Vertu Motors sites across the UK.

Asked about the risks taken by the business in letting people drive away in a brand new car unaccompanied, Forester said: “When you actually go for a test drive you will be the only person in the car, which will be quite a major change for customers.

Forrester outlined the roll-out of temperature testing for anyone who enters a Vertu Motors showroom, social distancing measures across its sites and vehicle cleansing procedures during his interview with the BBC.

He said that showroom vehicles would be locked and fully re-sanitised if a customer was allowed to sit inside following a viewing request.

In an earlier interview with AM, Forrester said that part-exchange vehicles would also be left for 24 hours before any members of staff would be allowed to enter them.

Read more from our interview with Robert Forrester in this month's digital edition of AM Magazine, by clicking here.

Commenting on the impact of COVID-19 enforced changes to the automotive retail environment this morning, Forrester said that the situation “clearly changes how we sell cars”, but added that Vertu had sold 650 vehicles last week alone “without a single test drive or a single person coming into a showroom”.

On the June 1 return to showroom trading proper, he added: “There’ll be some fantastic deals as we try to get the machinery of one of the largest industries across Europe up and running again.”

Last week AM reported on the Society of Motor Manufacturers’ (SMMT) ’10 Reasons To Unlock Auto’ campaign.

The challenge to UK Government to re-open showrooms came alongside claims that their continued lockdown was costing it £61 million per day in lost tax revenue and business support measures.

Mike Hawes, SMMT chief executive, said: “With every day of closure another day of lost income for the industry and Treasury, we see no reason for delay.”

Calls on Government to open car showrooms and earn taxes

Calls on Government to open car showrooms and earn taxes