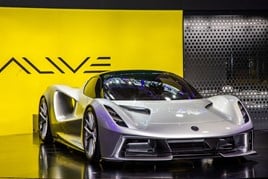 Park’s Motor Group is poised to open a new Lotus Cars sports car dealership in Hamilton in preparation for the brand's “exponential growth”.

The Hamilton-based AM100 retail group will accommodate the British manufacturer’s new franchise alongside its existing Maserati operation in a showroom on Almada St, Hamilton.

A statement issued by Lotus Cars today (July 29) revealed that he facility will open its doors during August, becoming the first new Lotus dealer in the West of Scotland for 15 years.

“We know it has a proud history and an exciting future, and we’re thrilled to be part of that. Lotus is a valuable addition to the Park’s family, offering even greater choice to our customers.”

Last week Lotus Cars announced the development of a new advanced technology centre and headquarters for its Lotus Engineering consultancy division, as part of a new partnership with The University of Warwick (WMG).

The venture will focus on the development of new low-carbon technologies to support the Government’s vision to de-carbonise the transport sector.

Global director of sales and aftersales Geoff Dowding told AM, in an interview late last year, that investment at Lotus Cars is set to give its franchised dealer network a chance to boost their sales and profits next decade.

Dowding (pictured) said underpinning that is Lotus’s route to market through its dealers, who globally achieved 1,630 new car sales in 2018, of which 274 were in the UK.

The brand’s Vision 80 plan will deliver “exponential growth in the future” for Lotus retailers, Dowding said, and his team had begun examining the brand’s global retail infrastructure to identify what improvements will be necessary in the coming years.

Commenting on the new dealership opening in Hamilton, Dowding, said: “This new Lotus sales and service centre in Hamilton is a wonderful addition to our UK network.

“Despite the challenges of the last few months, we’ve worked efficiently with the team at Park’s to ensure our current and future customers in Scotland have the facilities and support they need.”

Park’s Motor Group’s new Hamilton dealership – to the south-east of central Glasgow – will feature the newest Lotus, the Evora GT410, which has been designed to be a more usable ‘everyday’ sports car.

Also available will be the latest versions of the Lotus Elise and the Lotus Exige.

Speaking to AM last summer, chief executive Phil Popham said that the £2 million performance electric vehicle (EV) will be handled through the dealership network.

Popham has backed his dealership network to deliver the multimillion pound EV to a new breed of affluent customer for the brand.