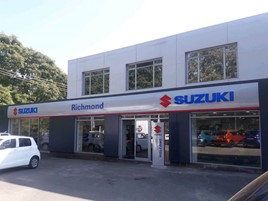 Richmond Motor Group and Delgarth Motor Group have both opened the doors to new Suzuki GB car dealership locations during the past week.

Richmond has begun welcoming customers to its newly-created facility adjacent to the Skoda franchise at Broad Oak, Botley, which became part of the group with the acquisition of Sparshatts in August last year.

Delgarth, meanwhile, has opened the doors to its new Suzuki franchised site in the Japanese brand’s UK hometown of Milton Keynes.

The MK franchise was vacated by Progress Suzuki in May this year, with the business falling into liquidation. Former managing director Terence Byrne admitting to AM that the business had found the impact of COVID-19 lockdown “too much to bear”.

Suzuki GB network development manager, Steve Prew, was among the first to congratulate both Richmond and Delgarth for adding the new franchises to their respective portfolios.

Commenting on the new Richmond Group site, he said: “It's always a pleasure to see an existing Suzuki partner open an additional site - the warmest of welcomes to Richmond Suzuki in Botley, Hampshire.”

Delgarth, meanwhile, is opening its first Suzuki franchise with the Milton Keynes opening, adding to a portfolio which already features Kia, Hyundai and Mitsubishi, with the new franchise on Stratford Road..

Richmond Motor Group has recently growth as a group and with Suzuki having completed the acquisition of Newmans Suzuki Southampton in May this year.

At the time, the group also revealed its intention to grow further with the opening of four more dealerships in the next 18 months.

The addition of the Southampton Suzuki site, which was brokered by Motorvise, meant that Richmond Motor Group had 14 franchise locations and one used car supermarket, covering an area from South-West London to Portsmouth and Southampton – employing over 550 people.

Portsmouth-based Richmond Motor Group joined the AM100 in 2019 – the highest-placed newcomer with a £141.3 million turnover putting it in 92nd place – but it said that recent growth had already seen its elevated to the status of a £250m business.