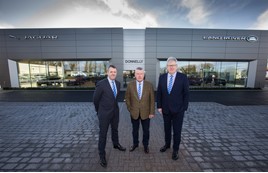 Donnelly Group has revealed a £2.66m pre-tax loss in its annual accounts for 2019 but stated that a rationalisation review of the car retail business had now liberated £8m in annual savings.

The group’s financial statement, published via Companies House on December 22, said that it had moved to close “non-performing franchises” following a review of its operations in the latter half of 2019 identified how to make cost reductions of £8m on an annualised basis.

It said: “All measures have now been implemented and the group is benefiting from the revised cost structure with improved financial results.”

Reflecting on the impact of the COVID-19 pandemic on the business in 2020, Donnelly said in its financial statements that it had been “strong and profitable” since reopening after the H1 lockdown period and expected to make a profit by the close of the year.

“This will represent a significant turnaround”, it added.

In January last year AM reported that the group had set its sights on delivering “the highest levels of customer service” to its Jaguar Land Rover (JLR) customers after opening a new £6m dealership at Dungannon.

That development came just months after the group revealed plans to bring a Honda franchise and a Motorstore used car supermarket to Bangor after completing the acquisition of the town’s Shaws Citroen car dealership.

In June this year AM reported on Donnelly’s closure of its Vauxhall dealership location in Omagh.

Donnelly Group was established by Peter Donnelly with a vehicle repair and taxi company in Caledon 1947 and was visited by AM magazine for the purpose of a dealer face-to-face feature following its 70th anniversary celebrations.

Group managing director Dave Sheeran was recruited to the business in October 2017.

A long-time General Motors executive, he was managing director of Opel Ireland from 2005 until 2017.

Speaking to AM then, Sheeran said: “What’s driving our next five- to 10-year plan is that we want to be the number one choice for people to work for and for fulfilling the motoring needs of the retail, fleet and public sectors.”

Donnelly Group aims to be 'No1 in Northern Ireland'

Donnelly Group aims to be 'No1 in Northern Ireland'