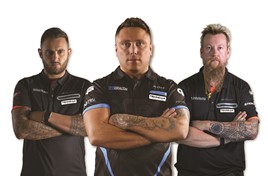 Marshall Motor Group has agreed to sponsor three professional darts players for the 2021 season, while online used car sellers heycar and Cazoo have confirmed sponsorships of the FA Cup on BT Sport and international snooker.

Throughout the year, recently crowned PDC World Champion, Gerwyn “Iceman” Price, Two-time World Championship Finalist Simon “The Wizard” Whitlock and one of the sport's emerging stars and 2020 International Darts Open winner, Joe “The Rockstar” Cullen (pictured) will carry prominent Marshall branding on their competition shirts as part of the AM100 group's deal.

Heycar’s partnership with will expose it to millions of passionate football fans who follow their team’s fortunes in the football's oldest cup competition.

The latest in a string of sports sponsorship deals for Cazoo will see the trio of prestigious events on the snooker calendar will be known as the Cazoo Series.

The newly-named Cazoo Players Championship will take place from February 22 to 28, followed by the Cazoo Tour Championship from March 22 to 28, and the Cazoo World Grand Prix scheduled for early December.

Commenting on Marshall's new involvement with darts, Marshall chief executive Daksh Gupta said: “We are delighted to join forces with three of the most recognised players in the world. This partnership will see the Marshall brand ‘on the oche’ of what promises to be a fantastic year of darts – which is seeing unbelievable exposure at these unprecedented times.

"For the 2021 World Championship, earlier this month, Sky Sports had a dedicated Sky Sports Darts channel across the 16 days, and a 1.25 million peak and an average of one million viewers for the final.”

Darts has been bought to the masses via online home tournaments titled ‘The PDC Home Tour’ and the MODUS Icons of Darts that was streaming live for nine hours a day.

As well as the shirt branding, throughout the next 12 months Marshall will be running competitions, social engagement programmes plus personal appearances of players (when possible) plus virtual meet and greets and online game challenges.

Heycar will sponsor all of BT Sport’s FA Cup broadcast coverage as well as live streams across App and online and is supported by an integrated campaign spanning media and digital that aims to bring the romance of the FA Cup to life despite fans not being able to be there in person.

Alongside the partnership, heycar has organised an internal sweepstake, which could see one of its dealers and their staff win £1,000 Amazon vouchers if their allocated team wins.

Tracy Woods, chief marketing officer at heycar, said: “With the nation remaining in a prolonged state of lockdown, how we reach our target customers and ensure we continue to build awareness is key.

“It's been a strong start to the year at heycar despite the obvious challenges, but our focus is very much on how we continue to deliver a strong and sustained volume of quality leads to our dealer partners during this tough period and beyond.

“This sponsorship offers us a great opportunity to get in front of a very relevant audience over the coming months, building the brand’s credibility and ensuring when this audience thinks about buying a car they think heycar first.”