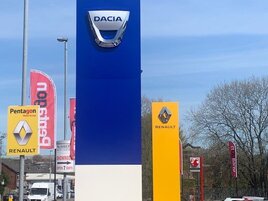 Pentagon Motor Group has added Renault and Dacia franchises to its Rochdale site after moving the town's Vauxhall sales operation to Oldham.

The AM100 car retail group's Lancashire location will mnow function as a Vauxhall approved repairer - one of 11 Vauxhall locations held by the group - alongside its new Renault and Dacia sales and service function.

The group’s nearby site at Middleton takes on the Renault Van side of the franchise as Vauxhall car sales are hendled by the group's larger franchised site in Oldham..

Pentagon managing director, David Lewis, said: “We have a clear strategy of focussing our efforts on the major marques in the UK market, and with room to add a quality brand such as Renault alongside our established Vauxhall business in Rochdale, with the Dacia brand alongside it, this was a good fit.

“The addition of the Renault Van operation at our Middleton branch is another strong benefit.”

Pentagon described the move as a “rebranding at an established site” and said the manning of the new operation will be handled through existing Pentagon Motor Group team members, with full training and support on the new brands put into place prior to opening.

In the last 12 months, Pentagon has taken additional Ford, Vauxhall, Seat and Peugeot locations into its operations.

Pentagon severed its ties with the FCA Group with the closure of its dual-brand Alfa Romeo and Jeep dealership in Doncaster in July, 2020.

Derby-based Pentagon Motor Group, which became part of Motus Group (UK) in 2017, operates 47 franchise outlets for major brands, from 23 sites across the the East Midlands North.