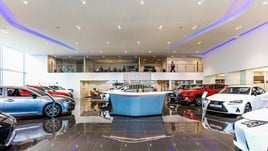 Motorline has revealed that Government furlough support and the sale of properties contributed to a 118% rise on pre-tax profits during a COVID-impacted 2020.

A statement issued by the retail group said that its board was “really pleased” with the outcome in a year which saw the automotive retail sector hit by a series of lockdown-enforced showroom closures.

The group claimed £7.1m in funding from the Government’s Coronavirus Job Retention Scheme (CJRS) in the reported period and also sold a redeveloped property in Crawley, West Sussex, for £9.4m – resulting in a profit of £3.7m.

It attributed its decline in turnover to the closure of its Renault dealerships, but the 2020 results included its first full year of trading from the former Inchcape Audi dealerships, in Maidstone and Tunbridge Wells, which were acquired in 2019.

Motorline also opened a new Skoda dealership in Gillingham and completed the relocation of its Audi dealership in Canterbury to a new ‘state-of-the-art’ facility last year.

In a deal completed after the reported period, Motorline also revealed that it had acquired a 20% share in GGT Estates for £2.75m.

“The hard work our teams have put in growing our recent new businesses or implementing acquisitions is now paying off as we see those businesses mature and begin to generate the projected returns,” director Glen Obee said in the group’s results statement.

The group also said that it had seen “strong sales demand” since it was fully reopened on April 12 this year, with orders “exceeding our average every week since reopening”.

“Whilst we do have some concerns over vehicle stock availability for the balance of 2021, we are confident of achieving a strong result for 2021 that exceeds the 2020 performance,” it said.