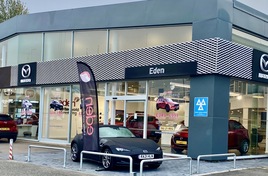 Eden Motor Group has given Mazda UK its first presence in Reading for over a decade after creating a dual-brand showroom in its existing Hyundai Motor UK dealership.

The creation of the AM100 2020’s 51st-placed car retail group’s new franchise point in Rose Kiln Lane, Reading, means that its portfolio of sales outlets across the South now totals 24, representing seven brands.

Group operations director, James Kurd, said: “Eden has had a long and successful relationship with Mazda through our sites in Basingstoke and Taunton, so extending this to Reading where we’re already an established name was both a great move for Eden and a great move for Mazda.

“With Vauxhall and Hyundai already represented by Eden in the town, Mazda was the perfect fit for our portfolio.

“We’re absolutely delighted to further represent the brand as it continues to diversify and evolve, especially with its electric models.

“We have already welcomed hundreds of customers from Reading and the surrounding areas into our new showroom to demonstrate all that Eden Mazda has to offer.”

Mazda is celebrating its 20th anniversary in the UK this year.

Mazda Motors UK was created on August 1, 2001, with the intention of bringing the UK market closer to Mazda’s global HQ, and now accounts for 16% of Mazda’s European sales volume.

It now has 135 employees and a network of 122 dealers, while the 20th Anniversary of the business has also seen the launch of Mazda’s first battery electric production car – the MX-30 in the UK.

Eden – profiled by AM in 2019 – took its Hyundai franchise count to four locations when it acquired Torbay Hyundai, taking its representation with the Korean carmaker to four sites.

Its Reading dealership was its first Hyundai franchise and was acquired from West London Motor Group back in 2015.

It later expanded its relationship with the Korean brand through the opening of new dealerships in Wycombe and Wokingham.