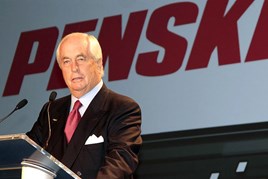 Sytner Group and CarShop owner Penske Automotive has reported a 25% rise in revenues and 127% increase in pre-tax profits in its annual financial results for 2021.

Its UK retail division contributed 31.2% of the group’s overall revenues during a year which saw the CarShop used car supermarket network – rebranded globally in-line with its UK operation – expand with six new locations.

“Over the last two years we have paid down nearly $900 million in non-vehicle debt, reduced our debt to total capitalization to 26% from 46%, and improved our leverage ratio from 2.9x to 0.8x and as of December 31, 2021, returned over $530 million to shareholders through share repurchases and cash dividends.”

Developments in the AM100-topping Sytner Group franchised car retail business in 2021 brought about the completion of a new Jaguar Land Rover dealership in Northampton and plans to expand its BMW dealership in Coventry.

The group also separated its Ferrari and Maserati dealerships in Birmingham and begun trading from Ferrari’s first new UK franchise point for 15 years ahead of the opening of a new Glasgow showroom in Q1 this year.

Last month AM reported that Sytner’s Tower Garage Ferrari dealership in Egham had been named as the Italian supercar maker’s ‘Top UK Dealer 2021’.