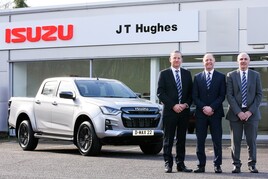 The Shropshire-based car retail group has moved the IM Group-imported brand into its former Mitsubishi showroom, which adjoins its Kia Motors retail site off Poole Road, Newtown, which it opened in January last year.

The car retailer’s addition of Isuzu as a franchise partners marks further growth of its rugged 4x4 brand portfolio following news that it had signed a franchise agreement with Ineos to sell its Grenadier off-roader.

Commenting on the opening of the group’s new Isuzu dealership JT Hughes managing director, John Hughes, said: “We are immensely excited to forge this new partnership with Isuzu. Introducing the Award-Winning Isuzu D-Max range at JT Hughes Newtown will allow us to continue providing our customers with the finest commercial vehicles.

“It’s an exciting time at JT Hughes, as we refresh our showrooms with several of the world’s most innovative and iconic car brands.”

William Brown, Managing Director, Isuzu UK said: “We’re delighted to be welcoming the JT Hughes Group into our network as we drive to enhance our sales and aftersales operations in all corners of the UK.”

In October last year Isuzu celebrated the “vital” expansion of its pick-up dealership network after Chorley Group became the latest of 16 new additions in 2021.

in April last year, AM reported that eight of the 11 new additions at that time had been ex-Mitsubishi sales franchises.