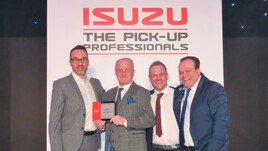 Isuzu UK has recognised its top performing retailers at its annual Dealer Conference and Awards, with York Van Centre named Dealer of the Year.

York Van Centre also picked up the regional award for its area at the event, which was held in London, on March 16.

The Shipton-by-Beningbrough dealer repeated its 2020 performance in accepting the top award for a combination of overall sales performance, innovative dealer event, parts and accessory sales and exceptional customer satisfaction.

The title of New Dealer of the Year was awarded to Hunt Forest Group. Based in Blashford on the edge of the New Forest National Park, Hunt Forest Group was commended for an impressive first full-year sales performance along with its customer  and brand experience and positive attitude.

Hunt Forest Group was also awarded Dealer Event of Year for a launch event it held at Thruxton Motor Circuit in Hampshire.

Isuzu UK wanted to use this year's annual Dealer Conference and Awards to recognise those dealers and individuals who have made a real difference in the local area and to the local community.

Sherwoods Isuzu Washington received a special Dealership Community Award in recognition of the support it provided to local charities.

All of these winners were nominated by colleagues and team members for individual outstanding contributions either to the brand, the dealership or their local community.

Having been involved with his family business since the 1970s, Cunnah started his automotive career cleaning cars, but with hard work, drive and dedication he worked his way through the ranks to his present position at Threeways Garage, which is one of the longest-serving Isuzu dealers in the UK.

Speaking at the awards, William Brown, managing director of Isuzu UK, said: “It was fantastic to host our Dealer Conference and Awards this year as a live event, having done it virtually last year.

“After a difficult couple of years for everyone, we wanted to use this year's awards to recognise not just top-selling dealers, but to identify and honour those dealers and individuals who have gone above and beyond in this past year.

“We have some very inspirational and deserving winners and runners-up, all of whom merited recognition. So much so, it was extremely tough to decide between them.”