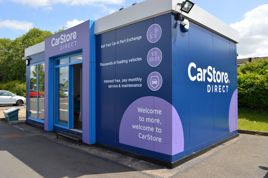 Pendragon has broadened the footprint of its Sell Your Car and Click and Collect used car retail services with the opening of 10 Carstore Direct sites at Morrisons and Homebase stores across the UK.

The small pop-up locations, first trialled in 2020, are located in the car parks of the supermarket and DIY chain sites and are staffed by Personal Advisors – aiming to deliver a pressure-free retail experience – six days a week, the AM100 PLC said.

The move to grow the CarStore Direct proposition gives the CarStore brand an increased national presence after a rationalisation of its car supermarket model ultimately brought about the closure of 23 of its previous 32 locations.

It also follows the recent launch of a new CarStore Experience Centre concept, with the opening of a site in Chesterfield.

“In response to growing consumer demand for greater shopping convenience, we are expanding our physical footprint into more locations to deliver something new and more aligned to our customers’ needs.

“We are fully confident our new used vehicle proposition will deliver this, and so much more.”

The group’s launch of CarStore Direct comes six months after the re-launch of the CarStore division in a form that aimed to deliver a hybrid sales model designed to remove the “restrictive” process of traditional retail and new online rivals.

The move forms part of a growth strategy which it hopes will deliver an underlying profit before tax of £85m to £90m by 2025.

The action came weeks after influential shareholder advisory group Glass Lewis branded the group’s decision to issue sizable bonuses in a year in which the business claimed almost £65m in COVID-19 support from the UK Government as “inappropriate”.

In taking its Sell Your car used car buying service to car parks across the UK, Pendragon is emulating a formula employed by Constellation Automotive’s Webuyanycar division.

Recent incidents of vandalism and attempted theft from such sites appears to have highlighted their vulnerability to security risks, however.

CarStore Direct customers will be able to obtain a fast and accurate quote for their used car.

The sites will also be used as Click and Collect points for CarStore’s online car buyers.

Pendragon said: “CarStore has ambitious plans to grow this offering in further locations during the coming months.”