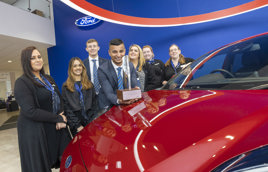 Ford has celebrated the success of its top 30 car and van retailers by naming the recipients of its annual Chairperson’s Awards.

Among the most successful AM100 car retail groups represented in the awards were TrustFord, Vertu Motors’ Bristol Street Motors and Macklin Motors divisions and Lookers.

Sarah Walker, loyalty and e-commerce manager for Ford Britain and Ireland, said: “Our dealers are required to perform consistently highly in both service and sales areas of the business.

“These winning dealers are delivering exceptionally high levels of customer engagement, combined with equally strong sales and after-sales performance, despite the challenging environment in which we are operating.  Congratulations to them all.”

Celebrating Vertu Motors’ success, the PLC’s chief executive Robert Forrester said: “It’s fantastic that three of our dealerships have been recognised in this way.

“The winning dealerships are chosen from real and honest feedback from customers, which makes it all the more rewarding.”

Winning dealerships in the annual Chairperson’s Awards demonstrate the delivery of exceptionally high levels of customer service and satisfaction, combined with strong sales and aftersales performance.

Franchisees have had to perform well in the challenging environment presented due to the COVID-19 and supply shortages which recent triggered the suspension of Fiesta sales in the UK.

Extensive research is continuously carried out by Ford to assess exactly how customers feel about the quality of attention they receive from their chosen dealership – whether buying a new car or having their vehicle serviced.

Society of Motor Manufacturers and Traders (SMMT) H1 new car registrations data published yesterday showed that Ford was the best-selling brand in the UK during the first half of 2022.

Its Puma crossover was H1 2022’s second best-selling car, behind the Vauxhall Corsa, with the Kuga SUV also featuring in the top 10.

Kerry Motor Works, of Tralee, and Michael Lyng Motors, of Kilkenny, emerged as winners in a cars section of the awards issued in Ireland, while Spirit Ford and Colton Motors emerged as top performing commercial vehicles (CV) dealers. 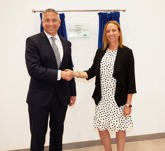 AM Poll
Have you noticed fuel economy rise in used car buyers' priorities this year? Please leave a comment
Vote
View all
3276