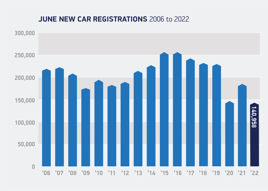 UK’s new car registrations slumped to their worst June since 1996 after ongoing component supply issues contributed to a 24.3% decline - but the cost of living crisis is yet to bite.

Society of Motor Manufacturers and Traders (SMMT) chief executive Mike Hawes to conclude that semiconductor shortages are “stifling the new car market even more than last year’s lockdown” after another month of declining sales left the sector 11.9% down year-to-date.

Hawes said: “Electric vehicle (EV) demand continues to be the one bright spot, as more electric cars than ever take to the road, but while this growth is welcome it is not yet enough to offset weak overall volumes, which has huge implications for fleet renewal and our ability to meet overall carbon reduction targets.

“With motorists facing rising fuel costs, however, the switch to an electric car makes ever more sense and the industry is working hard to improve supply and prioritise deliveries of these new technologies given the savings they can afford drivers.”

According to the SMMT, OEMs have been left struggling to meet demand from car buying consumers as supply shortages are exacerbated by COVID-19 pandemic restrictions in China.

AM has recently reported on MG’s suspension of its EV sales as it battles to deliver on an order band extended beyond the end of the year, as Ford’s issues caused it to halt sales of its once best-selling Fiesta supermini.

Carmakers are prioritising EV production, however. 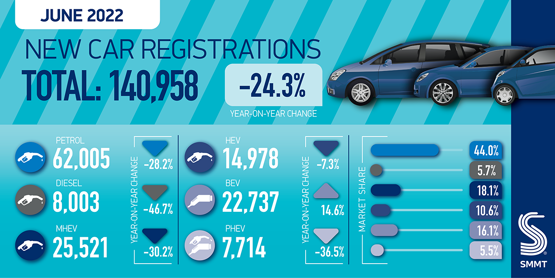 While EVs are currently viewed as the sector’s saviour, current registrations are built on a foundation of packed order books that have protected carmakers and retailers from the growing cost-of-living crisis.

In the longer term, concerns surrounding the affordability of EVs in a fragile economic climate remain.

A dwindling customer base for current EVs has already been expressed by Auto Trader and, in light of today’s registrations results, Lisa Watson, the director of sales at Close Brothers Motor Finance, said: “The soaring cost of living remains at the top of the agenda for consumers, with the price of electricity, petrol, and diesel all on the rise.

“This means prospective car buyers are having to think not just about the upfront cost, but also the ongoing maintenance and running expenses of a vehicle.”

Ian Plummer, commercial director at Auto Trader, said that the “real culprit” for faltering registrations was lingering disruption to the supply of vehicles rather than a slump in demand.

He added: “The latest monthly figures also give a clear indication that the cost-of-living crisis and the looming era of the £2 a litre fuel charge are turning many would-be buyers towards electric vehicles.”

Plummer said that a typical driver can now save £176 per 1,000 miles driven by going electric.

Raising concerns about an uncertain outlook in the longer term, however, he added: “In broader terms, with reports of continued strength of order take, official sales numbers alone won’t give us a clear picture of how the current inflation squeeze is affecting the wider car market for months to come, until manufacturers and retailers work through months of backed-up orders caused by shortages of crucial components hampering the supply of new vehicles.

“This situation has been worsened by the Ukraine crisis, which sadly looks likely to linger for some time to come.”