Infiniti signs up Game of Thrones star to push Q60 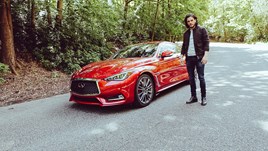 Infiniti has signed up Game of Thrones star Kit Harington to star in a short film with its Q60 coupe to help promote its rival to the BMW 4 Series and Audi A5.

Harington, famous for playing Jon Snow in the HBO series, recites William Blake’s poem The Tyger, while driving the Q60 on some roads within a forest. The one minute film is one of three being released to mark the launch of the Q60 later this year.

The new coupe will come with a 400hp twin-turbo 3.0-litre V6 engine, while a lower powered 2.0-litre four-cylinder will also be offered. Prices are expected to start at around £30,000.

Infiniti has ambitious plans to double its sales volume this year, and new country director, Barry Beeston, believes fleet sales will be key to that growth.

Having seen fleet business increase by more than 30% while corporate sales director at Nissan, Beeston has joined Infiniti at a time he feels the brand is on the brink of a step change.

AM Poll
Which aspect of your business will require most focus in 2021?
Vote
View all
1055