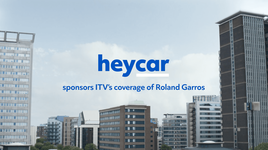 Heycar has announced that it will be the official sponsor of this year’s Roland Garros coverage on ITV as rival Gumtree launches its own cross-platform marketing push.

Online car retail marketplace heycar will sponsor the tournament’s live coverage on ITV from May 30 to June 13, as well as each episode of Roland Garros Second Serve, which will be available to watch on ITV Hub during the tournament.

Tracy Woods, chief marketing officer at Heycar, said: “As the second major championship of the year, Roland Garros is one of the most important dates in the tennis calendar.

“As the only Grand Slam to be played on clay, its bright orange courts are world-famous, while the notoriously challenging surface is responsible for some of the most exciting and tense moments in tennis history.

“We’re excited to be making our first foray into the world of tennis by sponsoring ITV’s broadcast coverage of Roland Garros.

“And we’re delighted to have such a brilliant opportunity to bring our ‘feel good’ messaging to a sport-loving audience.”

With coverage available live and free-to-air for 15 days on ITV4, totalling approximately 10 hours of coverage per day - Heycar said it is aiming to target a key audience of ABC1 viewers, which makes up the majority of the tournament’s audience.

The deal follows a string TV sponsorships announced by Heycar in recent months, including being the official broadcast sponsor of The Emirates FA Cup on BT Sport, which runs alongside its current sponsorships of the European and PGA/WGC Golf Tours, as well as their upcoming solus sponsorship of the 2-5pm Sky Sports News.

Bhavit Chandrani, ITV director digital and creative partnerships, said: "The power of live sport to bring people together is more important now than ever, so I'm thrilled to welcome Heycar as our broadcast sponsors of this year's Roland Garros coverage and bring their 'feel good' message to viewers."

Gumtree is aiming to promote itself as an automotive platform for younger ‘digital-savvy’, ‘mobile-first’ and ‘climate-conscious’ consumers, with its ‘Good Finds’ campaign.

“For many that’s a car, sold by a local franchised or independent dealer, for others it’s a new sofa, job or even a flatmate.

“The new brand activity champions Gumtree’s role as a connector and celebrates everything that people know and love about the website.

“The witty humour at the heart of the campaign is targeted at 18-36-year olds and we believe this will help our dealer partners connect with this important demographic, especially as used cars and vans are among the key Good Finds on Gumtree.”

The first of six ‘Just Good Finds’ adverts aired on May 22, with the remaining ads rolling out over the course of May and June, including one highlighting Gumtree’s role as a go-to local car buying platform.

More Good Finds activity will run for the remainded of 2021.