New consumer car finance volumes remained up on 2020 in the first nine months of this year despite slumping by over a fifth in September, the Finance and Leasing Association (FLA) has revealed.

Geraldine Kilkelly, the FLA’s director of research and chief economist, said: “Supply chain issues have been particularly acute in the car market which is reflected in the 17% fall in new business volumes reported by the consumer car finance market in Q3 2021.

“Motor finance providers expect constraints on new car supply to ease sooner than those in the used car market.

“The supply issues in the new car market have primarily been driven by the lack of semi-conductors, while the knock-on effects from new car shortages combined with high demand have hit used car supply."

Kilkelly added: “Despite the risks to the economic and market recovery from supply chain disruption, higher inflation and further waves of COVID-19, our latest research suggests that the industry has maintained its optimism about the opportunities for growth. 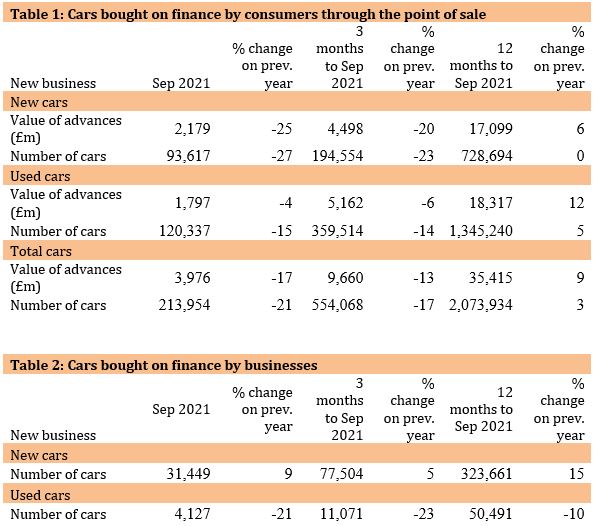 The FLA's latest market data showed that, in the nine months to September 2021, new business volumes from consumers remained 9% higher than in the same period in 2020 in spite of September’s 21% decline to 213,954 new and used vehicles.

Finance business for new car volumes realised through business sales grew 9%, from a low base in September 2020, to 31,449, meanwhile, as the number of used cars financed for business declined by 21% YoY to 4,127.