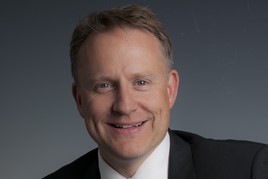 It said the new name reflects Dunton being at the centre of the company’s UK activities.

Dunton is now also the headquarters for Ford's European Commercial Vehicle business group, which has the aim of doubling Ford's CV profitability within five years.

Ford's former headquarters, at Warley near Brentwood, was home to 1,700 staff, and closed this autumn and the carmaker has applied for consent to turn the vast office building into more than 250 flats and to build homes on its car parks.

The vehicle manufacturer has also announced its engine factory in Bridgend, Wales, will close in 2020, putting 1,700 people out of work.

Graham Hoare (pictured), chairman at Ford of Britain, said the Dunton development "is an important step for our Ford business activities and shows our continued commitment to the UK."

A main driver has been to reduce Ford's cost base.

“This is one among a number of actions as we continue to improve our efficiency and effectiveness to create a sustainably profitable Ford business in this country," said Hoare.

“The consolidation of our commercial vehicles business group and our other main office and technical operations on the Dunton Campus provides many of our employees with better, more creative and collaborative working environments, while also reducing costs and enhancing our ability to better focus on the needs of our customers.”

Ford said its European financial results in 2019 will show an improvement, demonstrating it is on the path to delivering a 6% EBIT margin.

Its new test facilities start operation in late 2020, and technical personnel presently working in other test areas will operate the new facilities following any required upskilling or retraining.

Ford will also launch eight electrified passenger vehicles and commercial vehicles in Europe this year, with nine more to come – including full battery electric vehicles – by 2024.

The closure of Warley and Bridgend are the latest signs of continued decline in Ford's dominance of the UK's market for new car and light commercial vehicles.

In just over a decade its new car market share has declined by more than six percentage points to almost 10%, although it remains the clear leader in the van market, with 35% share.

Six years ago Ford closed its Southampton factory which made the Transit van, moving production to Turkey.