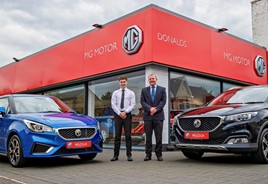 Donalds Group has opened the doors of a second MG Motor UK dealership in Stamford just a month after joining the franchise with the opening of a new showroom in Peterborough.

Both of the new MG franchise points have been accommodated in the group’s existing Mazda UK franchised sites on Burghley Road, Peterborough, and West Street, Stamford.

Both sites feature full maintenance and aftersales support, with experienced technicians trained to work specifically on the MG range and are equipped with electric vehicle (EV) rapid chargers to support the roll-out of MG’s electric vehicle strategy.

Mark Love, brand manager for Donalds Group MG, said: “MG is the fastest-growing car brand in the country and a real motoring force to be reckoned with.

“By opening these two outlets we at Donalds are bringing a fresh new alternative to customers across the area.

“Our Peterborough dealership has already got off to a flying start – we’re open seven days a week to cope with the demand for our fantastic cars.”

Vehicle registrations data published by the Society of Motor Manufacturers and Traders (SMMT) earlier this month revealed that MG’s UK sales have grown by 39.7%, from 6,695 to 9,352 year-to-date to the end of September.

The brand has achieved early sales success with its first full electric vehicle, the ZS EV SUV after matching the Government’s £3,500 ultra-low emission vehicle (ULEV) grant with its own despit contribution.

Earlier this month the brand added the new compact HS crossover to its range line-up with conformation that pricing of the newcomer would start at £17,995.

Commenting on the addition of a second Donalds Group retail site to add to the brand’s growth plans, MG’s network development manager, David Allington, said: “As part of MG’s Momentum and Growth mid-term plan, we are constantly strengthening support for new and existing customers with our rapidly expanding network of dealerships.

“By the end of 2020, we aim to have 120 dealers nationwide and are delighted to welcome the highly-respected Donalds Group to our network.”

MG’s Momentum and Growth mid-term plan sees the business aiming to more than double its sales by expanding its dealer network and launching new models.

Established in 1950 on the site of the new Peterborough MG showroom, Donalds Group was praised by MG for its “strong local reputation across eastern England”.