Euro NCAP and Thatcham are calling for the standard fitment of more advanced driver assistance systems (ADAS) to vans, following the launch of a new test for commercial vehicle safety technology.

Euro NCAP and Thatcham Research have put 19 of the most popular vans through a new type of test that highlights how well they can avoid collisions with other road users.

Only three vans out of 19 tested achieved a ‘Gold’ rating for the performance of their driver assistance systems, while five received a ‘Not Recommended’ rating.

Research carried out by Thatcham found that only 12.8% of new vans featured Autonomous Emergency Braking (AEB), a system that warns the driver and can apply the vehicle’s brakes if it detects an imminent collision.

The technology is estimated to reduce around 38% of rear-end collisions and also protects vulnerable road users such as pedestrians and cyclists.

While the fitment of AEB is commonplace on cars, only a handful of commercial vehicles feature it as standard and many brands do not offer the technology at all.

Matthew Avery, director of research at Thatcham Research, said: “This first batch of test results show the fitment of crucial safety technology on vans is woefully low. It’s a serious issue that needs addressing urgently, particularly with van numbers increasing and the continued surge in demand for home deliveries during the pandemic and before Christmas.”

Data from 2018 showed vans were involved in more accidents that resulted in fatal injuries to other road users, per mile travelled, than any other type of vehicle on the UK’s roads. Between 2013 and 2018, collisions involving vans were responsible for a 14% increase in the number of serious injuries to pedestrians, car occupants, and van occupants. Cyclist casualties also rose by 22%.

New General Safety Regulation (GSR) legislation will require all new vans to be fitted with certain ADAS technology by 2024.

Thatcham Research is keen to see the UK deliver on the commitment it made to sign up to this before leaving the EU.

But, together with Euro NCAP, it also wants to see a change in the van manufacturers’ approach before then.

“There is a definite lack of parity between the levels of collision avoidance technology on vans compared to cars,” Avery explained.

“Modern cars have lots as standard, but vans have barely any. Brands are making a clear decision not to fit this important technology as standard and van operators are not even buying it as a cost option.

“The lack of parity even exists within the same manufacturers. Take Renault, for example. Its five-star-rated Clio has lots of standard fit Advanced Driver Assistance System (ADAS) technology that can save lives. But its Trafic van has practically nothing, not even as an option.”

How the vehicles performed

The vehicles used in the tests had the highest level of safety equipment specified, so the results are not necessarily indicative of every model on the road, only those that were ordered with the technology where it doesn’t come as standard.

In the first batch of tests, only VW’s Transporter – with a performance score of 65%, Ford’s Transit (63%) and Mercedes-Benz’s Vito (61%) earned a ‘Gold’ rating. Both the VW and Mercedes models are fitted with AEB as standard in the UK. Five other vans were rated ‘Silver’, and six were ‘Bronze’.

Michiel van Ratingen, Euro NCAP’s secretary general, said: “Manufacturers have to start taking the safety of this segment more seriously and fleet buyers should insist on choosing safety options to provide better protection for their drivers and for all road users.

“We want good-performing safety technology fitted as standard in a this segment of the market. Gold award winners Ford, Mercedes-Benz and VW are showing the way.” 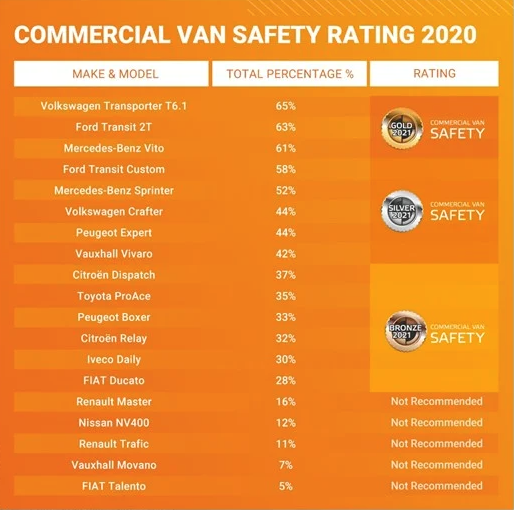