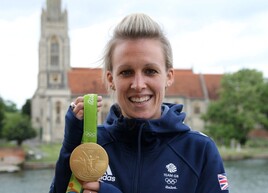 The AM100 car retail group underlined its commitment to colleague training at the event for 18 to 30-year-olds, which was co-hosted by regional general manager Will Hendy.

“Resilience is so important in our professional and personal lives and this workshop was designed to help our colleagues deal with challenges and come out stronger,” said Hendy.

“Alex has faced many challenges in her life and by talking about how she has coped with these gave our colleagues an insight into how they can use different techniques in their own lives.”

She was part of the GB women’s hockey team that made history at Rio 2016, winning in an emphatic shoot-out with the Dutch that recorded nine million viewers on the BBC.

Hendy Group colleagues from sales, marketing, business improvement and the people team were involved in the recent workshop where Danson talked about how she deals with low point and moves forward.

“One aspect we covered was learning how to fail fast and moving quickly on,” she said.  “Being part of the GB hockey team taught me how important it is to know strengths and weaknesses of team members and that is something that can be translated to business.”

Danson also talked about the importance of resilience following her brain injury in 2018 and the physical and mental battle that followed.

Hendy said that Alex also talked about the benefit of small wins which help build up our resilience bank.

“This was such a valuable workshop for the colleagues who said they had been inspired by Alex who has been a Hendy ambassador for 10 years,” he said. “We are now hoping to run similar workshops elsewhere in the Hendy Group area of operation.”