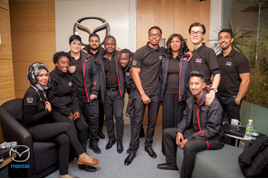 Mazda has launched its new MyWay direct sales and test drive service in selected central London boroughs to increase sales in the capital in areas it has no traditional dealership presence.

The Japanese brand says the new scheme has been launched in cooperation with seven of Mazda’s franchised dealers in the M25 area. The idea could be rolled out to other locations if it proves succesful.

Customers can order a car online, test drive it at home or at work, get a part exchange valuation at a location of their choosing and Mazda will also pick up and drop off vehicles for servicing work.

Those that want to use the MyWay service have to sign up for an account online. Finance can be arranged online and there's a live chat service for customers than need help on the website www.mazdamyway.co.uk.

Mazda has appointed a team of 12 based in Euston to operate Mazda MyWay. It says is has not employed sales people, but “brand champions” focused on customer service. The team of 12 speak 18 languages between them in order to help them communicate with customers in the cultural melting pot that is central London.

Brett Hague, Mazda senior manager for Franchising and Network Development, told the Evening Standard MyWay was born because it couldn’t easily fill gaps in its sales network in central London easily with bricks and mortar dealerships.