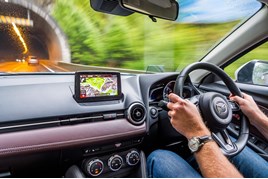 Drivers have expressed an desire to stay behind the wheel despite the advent of autonomous vehicles, according to a study commissioned by Mazda.

The survey found that 71% of UK drivers still want to drive themselves in the future, rather than relying on autonomous vehicles, and only 29% of those who took part in the poll said they actively welcome the arrival of autonomous vehicles.

Commissioned as part of Mazda’s Drive Together campaign, the research polled 11,008 adults across key European markets, including 1,002 in the UK, and revealed that across those countries an average of 66% of drivers wanted to remain behind the wheel even if self-driving cars become widely available.

It found that 70% of drivers in the UK “hope that future generations will continue to have the option to drive cars”, while 62% of respondents stated that they have driven “just for fun” and 81% of those who enjoy driving saying it is because it “gives them independence”.

In addition 55% stated that driving is about much more than just getting from A to B and 39% agree driving is in danger of becoming a “forgotten pleasure”.

Jeremy Thomson, Mazda’s UK managing director said: “It’s heartening to see that so many British drivers still love driving. Yes, self-driving cars are coming and yes they have a role to play, but for us there is nothing quite like the physical pleasure of driving; the quickening of the pulse, the racing of the heart, the open road, the special moments to treasure and share.

“If you look at the car industry in general, we believe that many manufacturers are taking a lot of driving pleasure away from drivers. At Mazda we are fighting against this and it’s clear from the research that there’s still a huge percentage of drivers who just want to be behind the wheel. In a world that questions the act of driving and devalues the role of the car and the role of the driver through technological changes, we will continue to challenge convention for the love of driving.”

Mazda is aiming to make the Mazda Co-Pilot Concept, which uses autonomous driving technologies to allow drivers to enjoy driving with peace of mind, standard by 2025.