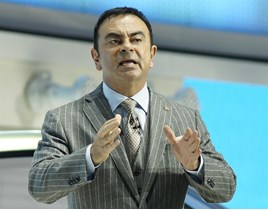 Renault has reported a decline in income and profit in the same week that PSA Group reported its H1 2018 success in returning Opel/Vauxhall to profit for the first time in almost two decades.

The French car manufacturers reported mixed fortunes for the first six months of the year, with PSA managing the turnaround of its two new additions to deliver 40.1% revenue growth (to £34.3 billion) and a 5% operating margin for its automotive division.

While Renault’s group revenues rose by 1.4% to £26.6 billion, however, its net income fell 16% to £1.8 billion in H1 due to a fall in profits from Alliance partner Nissan, while operating profit, which is not affected by Nissan’s contribution, fell 3% to £1.5 billion.

Renault said in a statement that the decrease in operating profit had come as the result of “a provision for restructuring”.

Carlos Ghosn, chairman and chief executive of Renault, struck a positive tone when reporting the brand’s results. He said: "The Group posted new record results for a first half-year in a volatile economic environment.

“These results are due to our strategy of regional diversification, the success of our new products and the commitment of all our employees. The results give us confidence in the achievement of our guidance for the year."

Reporting PSA Group’s H1 results earlier this week, group chairman Carlos Tavares told a press conference that the group – incorporating Citroen, DS Automobiles, Opel/Vauxhall and Peugeot – had delivered 40.1% revenue growth (to £34.3 billion) and a 5% operating margin for its automotive division during the period.

PSA results contained the news that Opel/Vauxhall had made a £447m operating profit in H1 on revenues of £8.9 billion, making it the first time the company has been in the black since 1999.

Speaking of the results as a whole, Tavares said: “The Group demonstrates since 2014 its recurring ability to level up global profitability, efficiency and volumes, despite strong headwinds.”

He added: “Opel Vauxhall teams start to deliver good results to build the New Opel Vauxhall and are eager to unleash further potential. Our agility and strong focus on execution remain a strong asset to reach our targets.”

The shift into profit for Opel/Vauxhall has not been achieved without a degree of pain, however, with redundancies in Vauxhalls UK manufacturing plants and the decision to terminate the contracts of all its UK retailers – a move that will result in a slimmed down network of around 250 retailers (from).

It said in a statement: “This 8.5% record profitability level was reached despite raw material cost increases and exchange rate headwinds, thanks to an increase of sales, a positive product mix and further cost reductions.”

Tavares appears to be steering PSA Group towards increased profitability by implementing his ‘Push to Pass’ plan, which has sets a number of targets for Groupe PSA (excluding Opel Vauxhall).

It also set out an aim of delivering 10% Group revenue growth by 2018, when compared to 2015 when the strategy was announced.