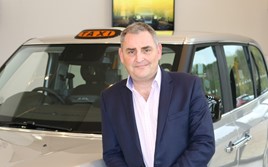 The London Electric Vehicle Company has announced the appointment of former Inchcape, Pendragon and Jardine Motors man Daniel Cross as its new head of retail at LEVC London.

The retail site, described by the brand as its “flagship dealer”, is located on Brewery Road and is part of a 10-site taxi cab retail network in the UK.

In his new role Cross, who brings expertise in finance and insurance, fleet management and aftersales to the site, will be responsible for managing and overseeing all dealership activities.

LEVC chief executive, Joerg Hofmann, said: “We are pleased to welcome Daniel to the team, he brings with him a wealth of experience and a strong track record in successful dealership management as we continue to grow our network and prepare the market for the introduction of a new electric van next year.”

LEVC said in its statement regarding the appointment of Cross that he had spent his whole career in automotive retail, holding dealer principal roles across a number of franchises such as Volkswagen, Jaguar, Land Rover, Aston Martin and Porsche.

His most recent positions were held at retail groups such as Inchcape, Pendragon and Jardine Motors.

The LEVC retail network is expanding in the UK as demand for electrified taxi cabs grows amid local authorities plans to introduce ultra-low emissions zone in a bid to tackle urban air quality issues.

Coming just a few weeks after Endeavour Automotive announced the opening of its second LEVC retail site, at its Volvo Car UK franchised site in Slough, Marshall added a new facility in Nottingham while Snows has opened the doors at a facility in Southampton.

LEVC is preparing for the arrival of its hybrid electric vans to the UK in late 2020.

Fitted with a range-extending hybrid system, the new model will have a fully electric range of around 80 miles and an overall range of more than 350 miles using the 1.5-litre petrol range-extender to charge the batteries.